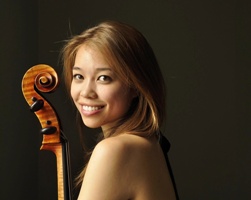 Alicia Ward made her orchestral debut as a featured soloist at the age of twelve, and has since performed throughout the United States and abroad as chamber musician, recitalist and soloist.

Ms. Ward’s performances have taken place in such venues as Carnegie Hall, Alice Tully Hall, the Kennedy Center, Davies Symphony Hall, the Great Hall of the Moscow Conservatory, the Mariinsky Theatre in St. Petersburg, Russia, and Jordan Hall in Boston. She has recently been featured in recitals in several of the embassies of Washington DC, Strathmore, and the Music Teachers National Association Convention in Denver. Ms. Ward is an Artist in Residence at Strathmore.

Ms. Ward has had successes in several competitions, including the Lennox International Competition and the National Symphony Orchestra Soloist Competition. She has won the grand prize at the Music Teachers National Association Young Artists Competition, The Fairfax Symphony Feuer String Competition, and the Washington Performing Arts Society Competition. Ms. Ward has been awarded a 2011 grant for Classical Music Solo Performance from the Maryland State Arts Council.

A passionate and active chamber musician, Ms. Ward won second place at the Fischoff National Chamber Music Competition in 2002 with her piano trio, Vidancia. The Koam Piano Trio, of which she was a member, was given a fellowship in 2006 to attend the Menuhin Chamber Music Seminar as an emerging artists ensemble. Ms. Ward is a founding member of the Vissi d’arte Piano Trio. She has served as principal cellist of the New England Conservatory Philharmonia, Peabody Symphony Orchestra, as well as the Peabody Concert Orchestra and has played under such esteemed conductors as Michael Tilson Thomas, Marion Alsop, Julian Kuerti, Hugh Wolff, John Adams, Pinchas Zuckerman and Carlos Kalmar.

Ms. Ward has been invited to attend the Kneisel Hall Chamber Music Festival, the Young Artists Program at the National Arts Centre of Ottawa, Canada, the International Music Academy in Pilsen, Czech Republic, the Orford Arts Centre Academy, and the Banff Centre Cello Master Classes. In 2005 she was one of twelve cellists selected to participate in the International Piatigorsky Seminar for Cellists held at the University of Southern California.

Ms. Ward began studying the cello at the age of six in San Francisco with Barbara Wampner. She received her Bachelor of Music from the Peabody Conservatory as the recipient of the Steven Kates Memorial Scholarship where she studied with David Hardy. She received her Master of Music from the New England Conservatory as the recipient of the Natica Righter Williams Scholarship, under the tutelage of Laurence Lesser. Her other principal teachers include Sandy Walsh Wilson of the Alexander String Quartet, and Hans Jorgen Jensen.